hide
hide
No announcements have been posted yet for Prentice, Yates& Clark.

On March 13, 2020, the Hockey Canada Board of Directors and public health officials has made the decision to cancel all Hockey Canada-sanctioned activities until further notice. As such, all Parkwoods Hockey activities, House League games, practices and NYHL activities have been cancelled. The health and safety of all participants at Parkwood’s is of the utmost importance and this includes our players, parents, and members of our community.

The Parkwoods Hockey League will stay in contact with Hockey Canada and Ontario Hockey governing bodies to establish best practices and timelines of when hockey activities can resume.

Parkwoods Hockey League is pleased to announce that registration for the 2020-2021 season is open!

Good news! You can now register your child for Parkwoods’ 2020-2021 season without making any immediate payment. Payment will be due closer to the season opening once the details of the season are clearer.

We appreciate there is uncertainty regarding the reopening of all sectors in the economy, however Ontario Hockey Federation (OHF) has authorized the opening of registration for the 2020-2021 Season. Parkwoods is planning on a full season starting in October and recognizing the inherent uncertainty, Parkwoods is offering a risk-free registration process where you can register your child now and payment will not be required until closer to the season opening.

We look forward to a seeing all our players again and a return to hockey in our community.

For any questions on registration, please contact us at parkwoods.inquiries@gmail.com.

The Toronto Marlies visit the PARKWOODS STARS at Fenside 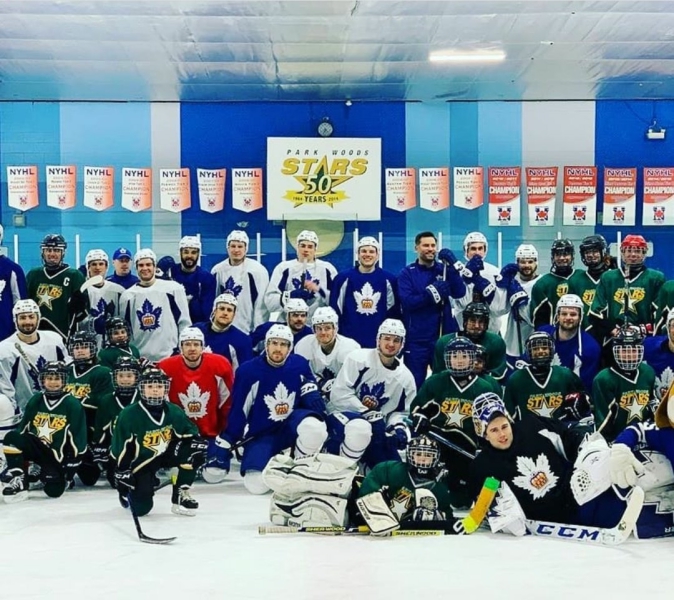 Visit our Community Tab – Special Events from the Home Page!!!

Hockey Canada and the Ontario Minor Hockey Association have announced new names for its age divisions which will take effect for the 2020-2021 season.

Following the recommendations of a task team, the age divisions will become U7, U9, U11 through to U21, impacting all minor hockey programs under the Hockey Canada umbrella. The change was initiated by Hockey Canada and its 13 provincial and territorial members and will be implemented nationally with their input and support for the 2020-21 season.

The National governing body Hockey Canada (which oversees the Ontario Hockey Federation (OHF)) has made the decision to cancel all hockey activities in the country for the balance of the season. The decision to cancel all Hockey Canada-sanctioned activities until further notice, effective Friday, March 13, 2020 has effectively ended the 2019-2020 hockey season. This includes all House League, Select, A, AA, AAA games, practices, skill sessions, tournaments, banquets and all other team and Club events. The OHF and its member partners will be in direct contact with all members to establish when sanctioned activities can resume.

Tryouts
As stated by the OHF and member partners (including the NYHL), the health and safety of all participants in the sport is of the utmost importance. As such, tryouts for the 2020-21 season will not be conducted this Spring. Instead the OHF will provide guidance on when the introduction of the 2020-21 season will begin, subject to the Hockey Canada Board of Directors’ future decision when to reinstate all Hockey Canada-sanctioned activities. Such introduction will take into consideration ice availability, capacity and other logistics involved in organizing hockey programs.

Thank You
The Parkwoods Hockey League has always considered public safety and the health and safety of everyone associated with minor hockey and our league, including players, coaches, staff, officials, fans, family, volunteers and the general public, to be of the utmost importance. As stated by Hockey Canada: “Although it is difficult to process the hockey season ending abruptly, we feel this is the best course of action in order to do our part in keeping our country safe.” The Parkwoods Hockey League would like to extend a resounding thank you to all the coaches and assistant coaches, the timekeepers and on-ice officials and the many other volunteers whose time and dedication allow the Parkwoods Hockey League to provide a fun, accessible and recreational hockey program.

We do look forward to a return to normalcy at some point, and we are sure that playing and coaching hockey teams in the 2020-2021 season will be an integral component of that much-anticipated return.

Further information regarding registration and tryouts will be forwarded as quickly as it becomes available.